Why the best propositions sell feelings

“Your own personal sun bed, free towels and childcare are all a standard part of the package on our sun-drenched Caribbean beach holidays”

This was the first time Olly had gone solo producing ad copy since he’d joined the “What’s The Story” ad agency. In fact, it was also the first time he’d presented anything to the management team.

But here he was, and there they were. A sea of blank, expressionless faces staring back at him.

His boss, Frank, broke the silence.

“Is that it?” he asked in that passive aggressive way that made it clear to Olly that he was really asking a completely different question.

Olly felt a little bit of wee come out.

If this was a training video, this is the point where the picture would freeze, and a syrupy-voiced narrator would appear on the screen saying something earnest like:

“Well that doesn’t seem to be going too well. Take a moment to think why Olly’s ad copy is not impressing his bosses. Maybe ask yourself, would it have prompted you to pick up the phone?”

Of course it wouldn’t. No-one is going to buy that damn holiday. It has all the appeal of double-entry bookkeeping. You know instinctively that it’s unappealing, but you may not be able to instantly tell yourself why. I’ll tell you exactly what’s missing later.

Right now, I want to talk about a different story. Your proposition.

Where is your prospect stuck?

If your proposition is to stand any chance of making people listen and act, then it needs to be a stronger look than Olly’s sunbed thriller on the beach.

Your ideal prospect is stuck, and they hate the place they’re stuck in. It doesn’t matter if they’re a startup which can’t get any customers, or a harassed executive who’s had enough of cold wet February days commuting, and dreams of some winter sun. They’re stuck in a place they don’t like, and they want to be in a different place.

To grab their attention, you’ve got to paint a picture that tells them how you can take them from where they are now to where they want to be.

People who are stuck, are usually stuck because they don’t have the skills, resources or knowledge to get themselves unstuck. They want help. They want someone who has all those skills and all that knowledge. But the way in which you tell them that you’re the one to help them is important, if you want to make them listen.

All of your competitors have been to the same school of writing ad copy as Olly. They’re all talking sun beds and beach towels; they’re boring on about features and ROI. If you want to stand out, you need to tell a different story.

When your prospect is lying awake in bed at night, they’re dreaming of the place they want to be. A warm beach with a cocktail. An office that runs smoothly, onboarding a steady flow of customers. They have a fantasy. Your job is to turn that fantasy into words and play it back to them.

You need to paint a picture for them of the land of milk and honey that you can guide them to. That doesn’t seem so hard, does it?

But here’s the important bit. Olly, listen up!

Don’t tell them what you’re going to do, or even what’s going to happen when you get there. Help them imagine how it’s going to make them feel.

Don’t tell them about sun beds and towels. Don’t tell them about stuff that sounds important to you, like ROI, savings or a full sales funnel. Help them to imagine how they will feel when they reach the promised land with you. Because what’s keeping them awake at night is how they feel now, and that’s what they want to bring an end to. 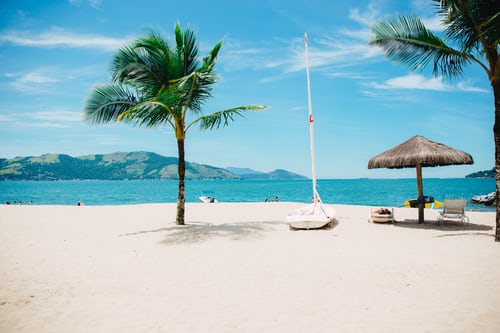 “When God made time, he made plenty of it in Barbados. Life is slow on the beach. With no deadlines, except maybe a midday cocktail, your cares and worries will melt away as morning blends effortlessly into a long afternoon with nothing to disturb you but the sound of waves lapping onto the beach. Let the soothing Caribbean sun wash over you. Lie back, relax, and soon winter at home will become a distant memory”.

Not a feature, product or beach towel in sight.

Olly brought all the features and the things. What he should have brought was all the feelings.

Go and open any sunshine holiday brochure and you’ll see this in action. Sure, the features are in there somewhere. But the imagery and headlines aren’t about the speed of baggage handling at Malaga Airport or the air-conditioned airport transfer. They’re about sunny skies, beaches, clear blue sea and people relaxing. They are pictures of the way you want to feel in your holiday dream.

People don’t care what you can do for them, they care how you can make them feel.